GHSA: Addressing the Role of Behavioral Safety in Safe Systems

ITE: Case Studies on Implementing the Safe System Approach in the U.S.

The Safe System Approach looks to anticipate human error in designing transportation systems to reduce fatalities and serious roadway injuries. Applications may vary from agency to agency, based on roadway conditions, type, and safety interventions necessary, and they range from separating users in space or time to increasing attentiveness to reducing impact forces.

These case studies were compiled by the Institute of Transportation Engineers (ITE) and funded by the Federal Highway Administration (FHWA), and provide valuable insights to further the goal of zero fatalities on our roadways. 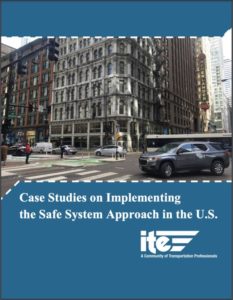 GHSA: An Analysis of Traffic Fatalities by Race and Ethnicity

To better understand how equity relates to traffic crashes, injuries, and fatalities, and to improve equity when addressing highway safety needs, the Governors Highway Safety Association (GHSA) compiled relevant research and data. The result is a report: “An Analysis of Traffic Fatalities by Race and Ethnicity,” which details the overrepresentation of minorities in crashes, including those involving fatalities. Data was analyzed from the five-year period of 2015-2019.

This research is valuable to those who may be looking for how to take action to address equity while they address speeding, impaired driving and other behavioral safety issues that contribute to traffic crashes. 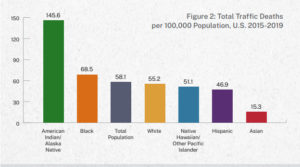 The Traffic Safety Culture Pooled Fund is a partnership between participating states and traffic safety organizations, managed by the Montana Department of Transportation. The Pooled Fund develops tools and services to transform traffic safety culture. It funds projects about methods to change beliefs, and tools to reduce multi-risk driving behaviors.

The Federal Highway Administration (FHWA) administers the Transportation Pooled Fund (TPF) Program as a means for interested States, FHWA, and other organizations to partner when significant or widespread interest is shown in solving transportation–related problems. Partners may pool funds and other resources to solve these problems through research, planning, and technology transfer activities.

To qualify as a pooled fund study, more than one State transportation agency, Federal agency, other municipal or metropolitan agency, college/university, or private company must find the subject important enough to commit funds or other resources to conduct the research, planning, and technology transfer activity. If a subject has been studied previously, the new study should provide new information that will complement or advance previous investigations of the subject matter.

Participating states sign on as partners to the pooled fund study and commit funds to the overall pool of funds. The group identifies priorities for research and the development of resources (see current projects here). By working together, the states are able to stretch their resources further. The Traffic Safety Culture Pooled Fund is in its second phase, but is still accepting partners.

Learn more about the Pooled Fund and its current projects.

Have information like this delivered directly to your inbox, with occasional emails from Toward Zero Deaths. Sign up here.